Mumbai: Katrina Kaif is promoting her upcoming film ‘Phone Bhoot’ in full swing these days. Siddhant Chaturvedi and Ishaan Khattar are also in important roles in this multi-starrer film of Katrina. This is a romantic comedy film. The trailer and songs of the film have also received a very good response.

Directed by Gurmeet Singh, the film is being produced by Farhan Akhtar and Ritesh Sidhwani’s production house Excel Entertainment. The film is going to hit the theaters on November 4. The screening of the film was held on Monday evening in which many stars attended. Actor Vicky Kaushal, husband of Katrina Kaif, also came to see the film, he has also given a review of this film on social media. 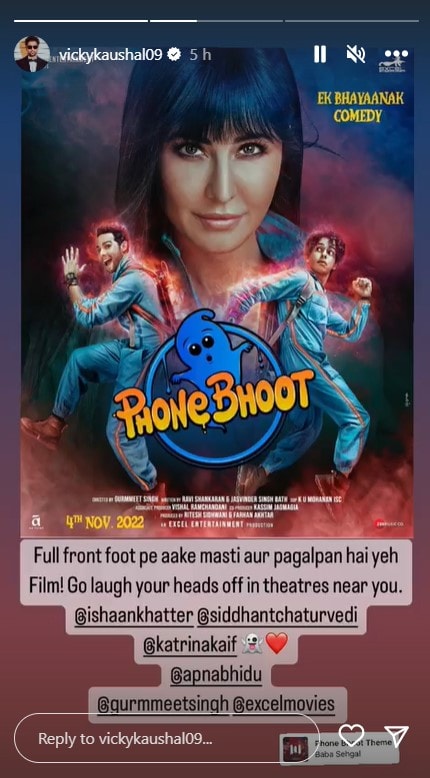 Vicky gave review
Vicky recently shared the poster of the film, with which he wrote, ‘This film is full of fun and madness coming on the front. Go to your nearest theater and laugh a lot after watching the movie. Vicky has also tagged this post with all the star cast. Not only this, while writing Katrina’s name, she has also shared a heart emoji in the post.

Katrina’s upcoming projects
If we talk about Katrina Kaif’s upcoming films, apart from the film ‘Phone Bhoot’, the actress is also going to be seen in films like ‘Tiger 3’, ‘Merry Christmas’ and ‘Jee Le Zara’. She is going to be seen opposite Salman Khan in ‘Tiger 3’. The release date of his film has been postponed. While in ‘Merry Christmas’ she will be seen opposite Vijay Sethupathi. If we talk about Zee Le Zara, then she will be seen with Priyanka Chopra and Alia Bhatt in this.