There is a ruckus on Twitter regarding Jubin Nautiyal, there is a demand to arrest the singer!

Jubin Nautiyal Captivating the minds of people with lavish voice. Fans eagerly wait for Zubin’s live shows, but a concert of Zubin is being fiercely opposed. Singers are getting trolled fiercely on Twitter. People are lashing out and tweeting by sharing the poster of the concert. Because of this, ‘Arrest Jubin Nautiyal’ is trending on Twitter with the hashtag. Zubin is being fiercely called good and bad on social media. This is happening because there is a demand to arrest Zubin because of the organizer of the live concert to be held in the US.

Seeing the manner in which there has been a ruckus on social media against Jubin Nautiyal, it can be said that the fans who make their favorite artist sit on the sky, they also throw them down on one of their mistakes. The whole ruckus regarding Jubin Nautiyal has started after the name of the Organizer appeared on the poster of the concert.

Zubin’s concert to be held in the US
Actually, on September 23, there is a live show of Jubin Nautiyal in America, whose organizer is a person named Jai Singh. It is being claimed about this person that he is a wanted criminal of India. A person named Rehan Siddiqui has tweeted about this show, in which it is written that my favorite singer host is coming. Great job Jai Singh…waiting for your wonderful presentation’. Zubin’s fans are demanding him to distance himself from this event. 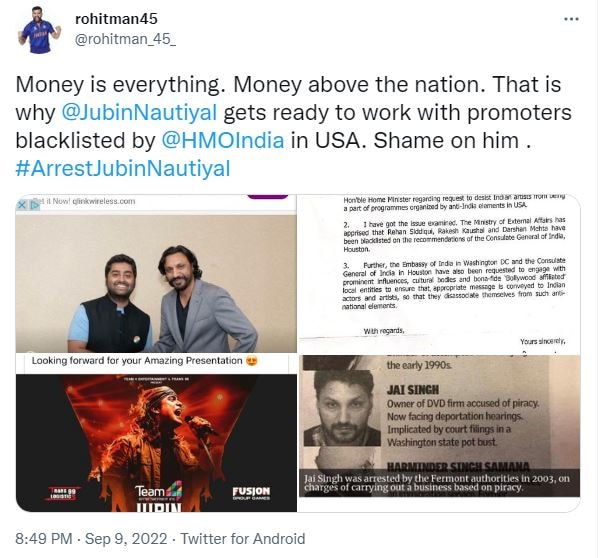 Who is Jai Singh?
According to the information received, Jai Singh, originally from Punjab, is a vetted criminal, whom the Punjab Police is looking for for the last 30 years. Jay now lives in America. There are allegations against him ranging from drug smuggling to video piracy.