Bollywood actress Urvashi Rautela is in discussion these days about her upcoming film ‘The Legend’. The actress is going to make her South debut with this movie. In this, Saravanan Arul aka Legend Saravanan, who is stepping into the world of acting from businessman, is going to be seen with him. Its trailer video has been released. Since then people are trolling him by calling him ‘child’. In such a situation, now KRK did not like Urvashi’s working with him along with the people and he said a big thing for him.

Seeing the pairing of Saravanan and Urvashi Rautela in the trailer of the film ‘The Legend’, film critics KRK tweeted and wrote, ‘Whatever money this joker Saravanan paid to Urvashi Rautela. But the actress should be ashamed of working with that monkey. Money is not everything in life. Respect is always above money. At the same time, many on social media agreed with KRK’s tweet, as well as many people compared the monkey as well as actor Saravanan to a ‘donkey’. At the same time, some have even compared KRK with Saravanan and are saying that ‘Both of you seem to be of the same category.’ Along with this, many tweets have also been received to see in support of actor Saravanan. One user wrote in support of Saravanan, ‘You called him a monkey. You haven’t seen yourself before that. Mr. Saravanan is a top successful businessman. He is just fulfilling his dreams in films… The first thing is don’t judge the film by seeing his face… its story may be lively. 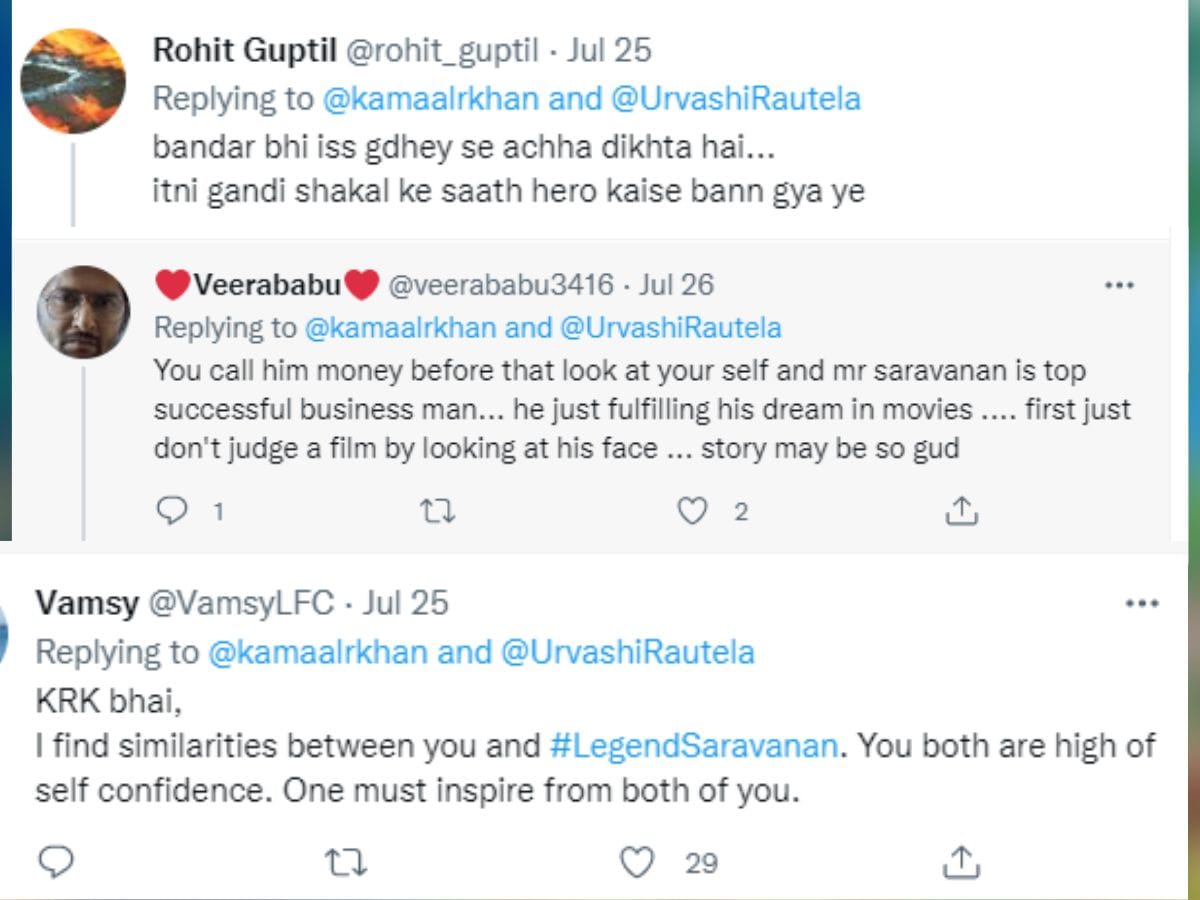 Who is Legend Saravanan?
Legend Saravanan’s name is Saravanan Arul and he is a well-known businessman. His family is also a successful businessman. Saravanan’s father, Uncle is a successful businessman in Chennai on July 10, 1970. The actor himself is the owner of ‘The New Legend Saravana Stores’. His height is 5 feet 4 inches. He first came into limelight in 2017 when 52-year-old Saravanan gifted his daughter clothes worth Rs 13 crore at her wedding. His daughter was married in Chennai. The second time he got popularity when he worked in a TV ad with South’s beautiful actress Tamannaah Bhatia and Hansika Motwani. According to media reports, his total assets are said to be Rs 150-200 crore.

However, if we talk about the film ‘The Legend’, apart from Saravanan and Urvashi, actress Raai Laxmi is also going to appear in an important role. The film will be released in five languages ​​Kannada, Tamil, Telugu, Malayalam, and Hindi on July 28.