Karthikeya 2 box office collection week 1: Nikhil Siddhartha and Anupama Parameswaran starrer Telugu film ‘Karthikeya 2’ is on the verge of becoming South’s next blockbuster in North India. The version of Kartikeya 2 is getting tremendous love from the audience and is continuously increasing its business at the box office. Interestingly, the South’s low budget film faced stiff competition from Aamir Khan’s ‘Lal Singh Chaddha’ and Akshay Kumar’s ‘Raksha Bandhan’ made on Big Scan. Despite this, Nikhil’s movie went ahead of both these Hindi films. Initially this film got only 50 screens but after the increasing demand of the audience, its shows were put on 1000 screens. 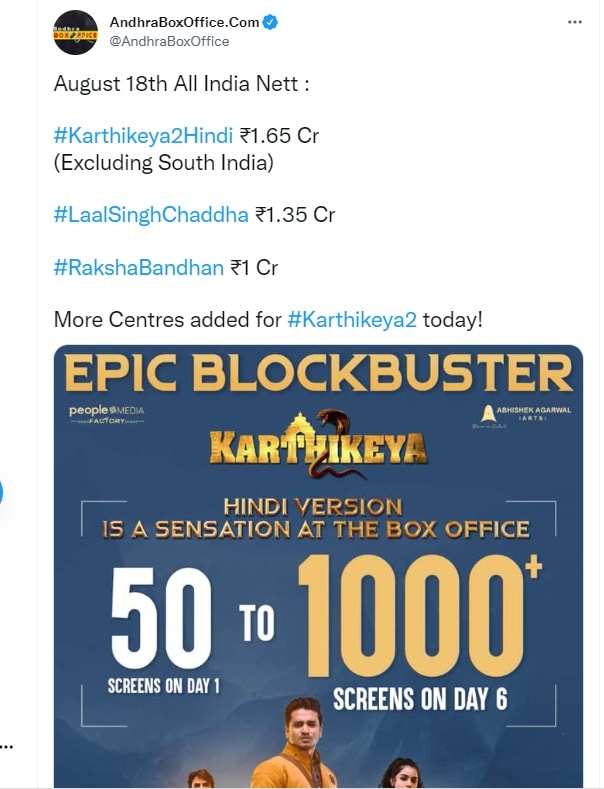 Trade expert Taran Adarsh ​​has given information about the first week box office collection report of the film ‘Karthikeya 2 Hindi version’. He told, so far Karthikeya 2 has earned Rs 5.75 crore. Taran has posted day-wise figures in which you can see that the film is increasing day by day in its collections. Liger will release on 25 and by then the film will do tremendous business. The film earned 7 lakhs on Saturday, 28 lakhs on Sunday, 1.10 crores on Monday, 1.28 crores on Tuesday, 1.38 crores to Mercury, Guru 1.64 crores. Total: Rs 5.75 crore. Let us tell you that the Bollywood film Lal Singh Chaddha has earned Rs 1.35 crore from the Hindi belt and Raksha Bandhan has earned only Rs 1.10 crore. In this way, Kartikeya 2 has earned 3 to 4 times more than both these films from North. Talking about the total collection of the film, so far it has done a business of 30 crores.

Nikhil Siddharth said, if the content is good then the movie will run

Nikhil recently visited a packed theater and also shared his thoughts on the overwhelming response to his film. Actors of South believe that a large number of viewers are watching his film in North. Nikhil said, ‘I want to say meditation, to all the people of India, who are giving me so much love. He shared his thoughts about the success of the film on a media portal and said, “If a film inspired by good content comes, people will see it… and today you are watching it. ..’