actor Shreyas Talpade will play the role of former Prime Minister Atal Bihari Vajpayee in Kangana Ranaut’s ‘Emergency’. In the film, Kangana plays the role of Indira Gandhi, while Anupam Kher will play the role of Jayaprakash Narayanan. Shreyas has shared the poster revealing his look from the film. Sharing the poster on his social media account, he wrote, “Honored and happy to play the most loved, visionary, true patriot and common man…Bharat Ratna Atal Bihari Vajpayee ji. I hope I live up to the expectations.”

Shreyas Talpade further wrote in the caption of the post, “It is time for a hashtag emergency! Ganpati Bappa Morya.” Shreyas also shared the poster on his Instagram account. In the caption of this post, he has quoted Atal Bihari Vajpayee’s poem ‘Badhae Aati Hai Aane’. Along with this, he expressed happiness on joining the film and also thanked Kangana Ranaut for giving him this role. 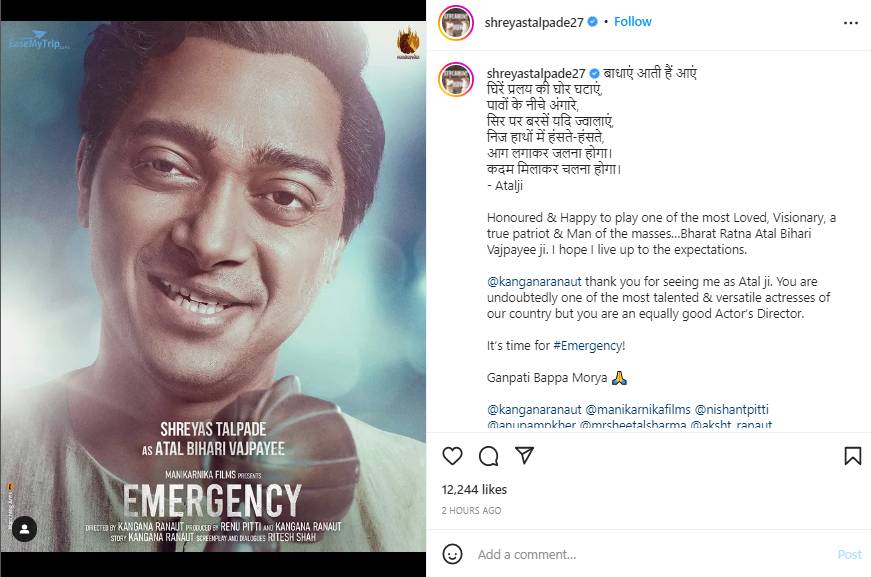 Shreyas Talpade wrote, “Kangana Ranaut Thank you for making me look like Atal ji. There is no doubt that you are the most talented and versatile actress in the country, but you are also the director of such a great actor. ,

At the same time, the producer of the film Kangana Ranaut also shared the poster and wrote, “In emergency, Bharat Ratna is presenting Atal Bihari Vajpayee to Shreyas Talpade. A true nationalist whose love and respect for the country was incomparable. Atal Bihari Vajpayee was a young and future leader during the Emergency.

Elli AvrRam B’day Spl: Elli AvrRam, who became famous with ‘Bigg Boss’, has added glamor to her with these 8 pictures

Rakhi Sawant completed her MBA! Became a doctor? Said- ‘I will fail Munna Bhai too’