Ranveer singh (Ranveer Singh) is counted among those stars who remain in the headlines due to their fashion along with acting. Be it films or fashion, they are always eager to try something new and keep challenging themselves, but this time due to something different, they were surrounded by controversies.

The controversy over the nude pictures of the actor increased so much that the matter reached the police. Two FIRs have been registered against Ranveer Singh for a nude photoshoot done for a magazine. In the complaint filed against him, it has been said that Ranveer has hurt the sentiments of women. Now TV actress Sumona Chakraborty has come forward in support of Ranveer.

Sumona first shared a news article about Ranveer on her Instagram story, in which it was written, ‘He hurt the sentiments of women and insulted their dignity.’ 2 cases have been registered against Ranveer Singh regarding nude photoshoot. Sharing this, he wrote, ‘I am a woman. Neither my dignity has been insulted nor my feelings have been hurt. Sumona also shared a screenshot of her mother’s reply on her previous Instagram story about Ranveer. His mother wrote, ‘The pictures were very nice. God knows what feelings got hurt. Maybe they wanted to see more. 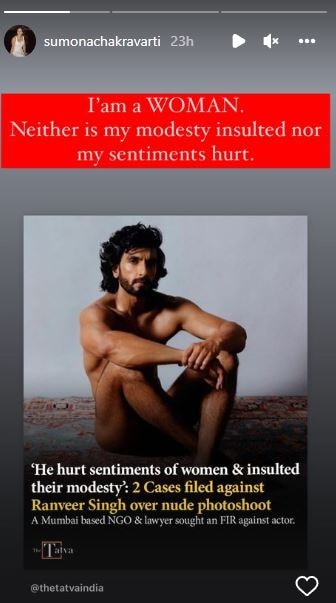 Photoshoot was completed in 3 hours
Ashish Shah did a nude photoshoot of Ranveer Singh at Mehboob Studio in Bandra, Mumbai. It took him 3 hours for this photoshoot. He said in a conversation with ETimes, ‘I have worked for Paper magazine before, but met Ranveer for the first time.’ The photographer said about the nude pictures that he did exactly what he thought was right at that time.

People’s reaction to nude photoshoot
After Ranveer’s nude photoshoot, many people are standing in his support, while many are opposing him. On this Ashish says, ‘These pictures will be liked by those who have an understanding of painting and photography.’ Ashish is also getting good response due to his photography. The pictures give a glimpse of Ranveer’s personality. Whether an actor will do a photoshoot like Ranveer or not, only time will tell.

Singham 3 preparations in full swing! Rohit Shetty to start shooting for the film with Ajay Devgan from this month

Gauahar Khan’s new web series ‘Shiksha Mandal’: The black scam happening in the education system is about to be exposed!