Rana Daggubati furious at IndiGo for missing luggage, tweets it as ‘worst airline’

New Delhi. Bhallaldev of ‘Bahubali’ i.e. Rana Daggubati today put a class on Indigo airline by tweeting one after the other. In fact, he expressed his anguish on Twitter saying, ‘India’s worst airline experience ever at- Indigo 6E!! Clueless with flight times.. Missing luggage not found.. Staff has no idea?? Can it get any worse!!’

The ‘Baahubali’ fame actor reportedly faced a bitter experience at Hyderabad’s Rajiv Gandhi International Airport while he was leaving for Bengaluru with family members. After Daggubati and others checked-in, they were informed that the flight was delayed due to some technical problem and were asked to board another flight. He was also told that his luggage would be sent by the same plane. However, after landing at the Bengaluru airport, the actor could not locate his luggage and when he checked with the airline staff, he found nothing. Daggubati also made some comments on the airline’s tweet, mocking their advertisement related post. He wrote on a post of Indigo with the tagline ‘Paradise Found’, ‘More Paradises have been lost than Paradise found’. On another tweet of Indigo, which read, ‘Our engineers who ensure safe and non-stop flights.’ But Daggubati also commented. 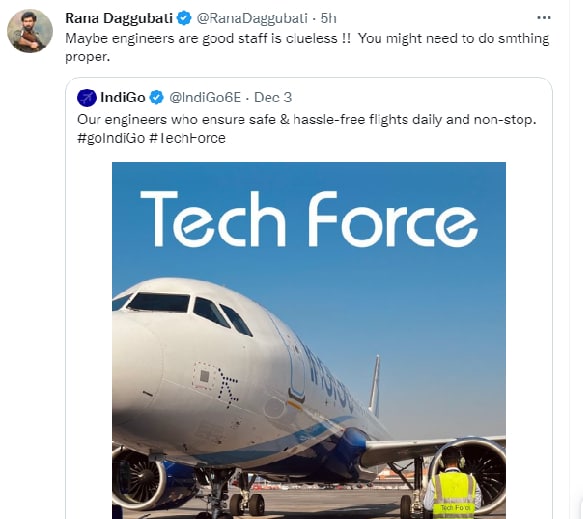 The actor also commented on the airline’s ‘Winter Sale’ tweet, ‘Note flights may not land or take off at any time with this sale!! They will have no idea about your belongings. Let me tell you, the famous actor of South and Bhallaldev of ‘Bahubali’ i.e. Rana Daggubati (Rana Daggubati) is known for his acting as well as outspokenness. 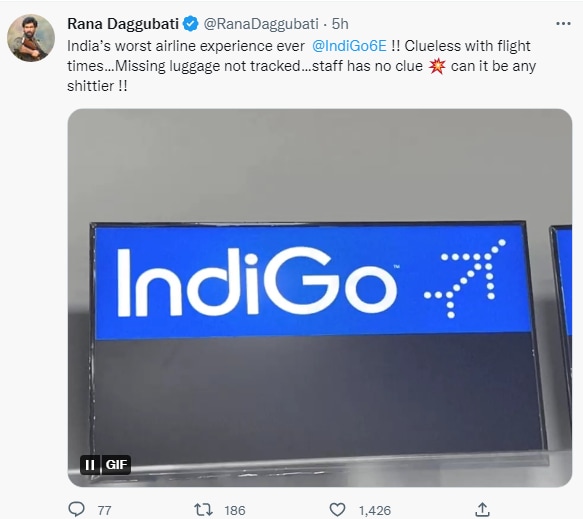 Rana Daggubati on South cinema is seen in a very cool style on the screen. He makes each of his characters strong with strong acting. In the same way, he is very cool in real life too. Along with his acting, he also remains in headlines because of his statements. This time Indigo airline came on his target. (Input also from IANS)