Bigg Boss 16 House Theme: Salman Khan’s show ‘Bigg Boss’ is the most popular reality show aired on TV. The show has completed 15 seasons. The makers are now going to bring the next season of the show. Needless to say that people’s eyes are fixed on season 16. Each season of the show welcomes the contestants to a new themed house. Jungle theme was kept last year, so this time maybe Aqua theme is being kept. A glimpse of this is being seen from the pictures leaked on social media.

Every season of ‘Bigg Boss’ gets a lot of love from the audience. Ever since season 15 is over, people have started discussing about season 16. Inside the house, the love affair and quarrel between the celebs associated with the entertainment world entertains the audience a lot. Some users have shared pictures of the new season on social media which are becoming very viral.

BB16 will be on aqua theme
A social media user shared a glimpse of the inside of the house on Instagram and said that ‘Bigg Boss Season 16’ will be on the Aqua theme. On seeing this picture, the excitement of the fans has increased. It is seen in the picture that the house of ‘Bigg Boss’ has been beautifully decorated with blue colored lights. Although it is not clear whether this picture is true or not, the makers have not given any kind of confirmation. 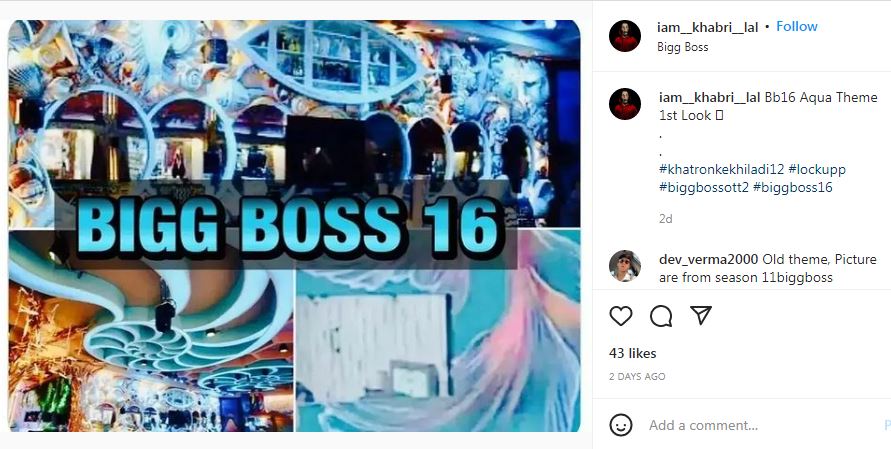 Due to the controversial photoshoot of Ranveer Singh, Mumbai Police reached his house, did not meet the actor