Actress Florence Pugh is in the news these days for her choice of dress at Paris Fashion Week. The actress appeared in a stunning pink gown at the Valentino Couture show in Rome and rocked Paris Fashion Week with her stunning look. This look of the actress is covered everywhere. But, many users have targeted her for this dress of the actress. Yes, Florence Pugh has come under fire for her see-through pink gown, to which the actress herself has now reacted.

Florence has shared a powerful long note on Instagram about her dress and her body, in which she has fiercely criticized the trolls. The Black Widow fame actress has questioned the trolls in her post as to why she is afraid to see the body of women. Taking a jibe at the derogatory comments, the actress wrote that she loves her body and is proud to be her woman.

In her post, Florence, while targeting the attacks on herself, wrote that- ‘It is interesting to see how easy it is for men to destroy women’s bodies. That too in public, proudly, for all to see.’ Along with this, Pugh also talked about his relationship with his body and said that he is happy with the flaws of his body too. 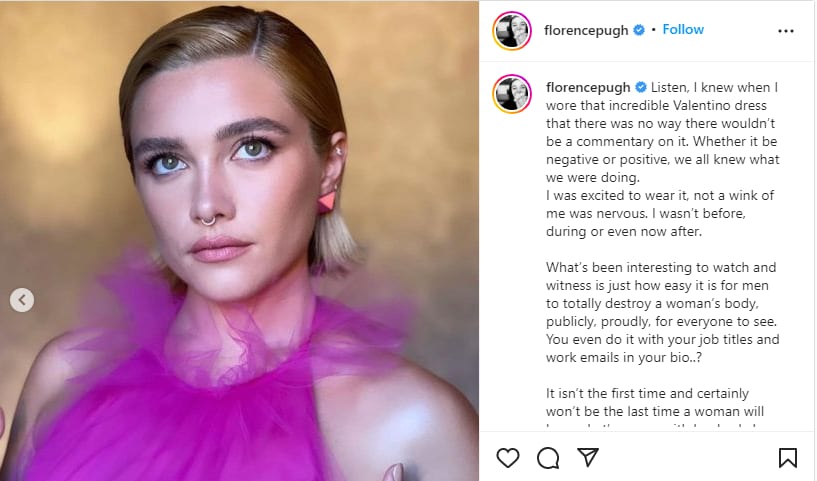 Pugh’s post was reacted by many of his colleagues from the industry and praised the actress for her courage. Commenting on Florence’s post, Jameela Jameel wrote- ‘You are a magical queen and all this is not worth you.’ At the same time, Joy King writes- ‘You are really amazing. You have put that thing through your words, which many people feel, but are unable to express. Many of her fans have also reacted to the actress’s post.