Milind Soman’s look revealed from Kangana Ranaut’s ‘Emergency’, the actor will be seen in the role of Sam Manekshaw

Kangana Ranaut These days she is working on her upcoming film ‘Emergency’. While the shooting of the film is going on on one hand, on the other hand, Kangana has also been sharing the first look posters of the actors joining the film. A while back, he has revealed the new actor and character involved in the film from his social media account. He also shared the first look of this character. Kangana revealed Milind Soman’s look as Sam Manekshaw on her official Instagram account.

In the poster of the film, Milind Soman can be seen in a sharp mustache and uniform. This look of Milind will definitely make you excited for the film. Sharing the poster, Kangana Ranaut wrote, “Happy to introduce Dynamic Milind Soman as Sam Manekshaw.” 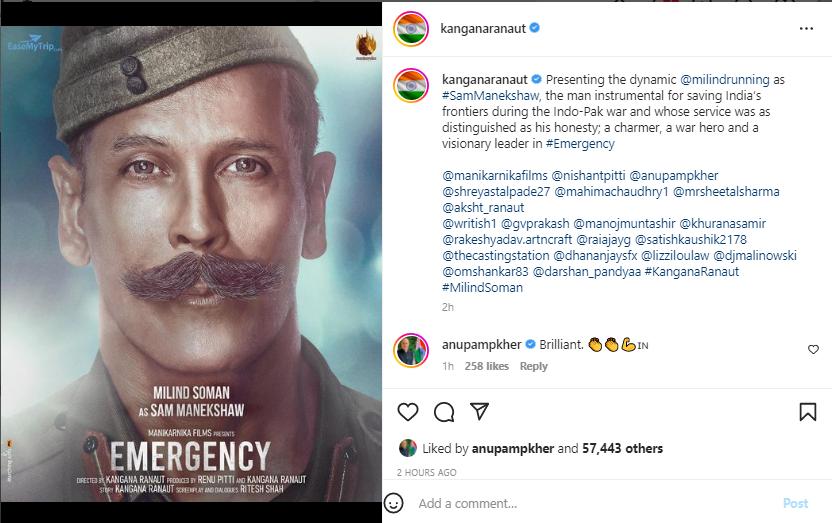 Kangana Ranaut further wrote, “The man who played a vital role in saving India’s borders during the Indo-Pakistani War and whose service was revered as his honesty; A charming, a war hero and a visionary leader in an emergency.” At the same time, Milind Soman also expressed happiness on joining Kangana’s film. Milind Soman expressed happiness over getting the character

While sharing his first look from the film, Milind Soman said that he is feeling proud. He wrote, “Honoured to be a part of Kangana Ranaut’s ‘Emergency’ and play the role of Sam Manekshaw, the man who, with his wit and valor, led India to victory in the Indo-Pak war of 1971! “

Let us tell you that Sam Manekshaw’s army career lasted for four decades. He had seen in five wars of India. He was the first Indian Army officer to be promoted to the rank of Field Marshal and his military victory in the Indo-Pak war of 1971 led to the creation of Bangladesh.