Ranbir Kapoor The kind that was expected from the film ‘Shamshera’, it could not live up to it. The box office of this film, which was released in theaters on July 22, is not getting to see anything special. According to media reports, this film, which was made at a cost of 150 crores, has not even earned 50 crores in 4 days. According to the reports, in four days, only Rs 34 crore has been spent by ‘Shamshera’.

The critics’ reviews about the film were also not very special, perhaps because the film is proving to be unable to bring the audience to the theatres. Famous film critic Taran Adarsh ​​​​of the film world has given 1.5 rating to ‘Shamshera’. At the same time, now KRK (Kamal R Khan), who is in the headlines due to his controversial tweet, has targeted Ranbir Kapoor. While sharing the list of 9 flop films of Ranbir, he has also mentioned the total loss of the producers so far. See, KRK’s tweet- 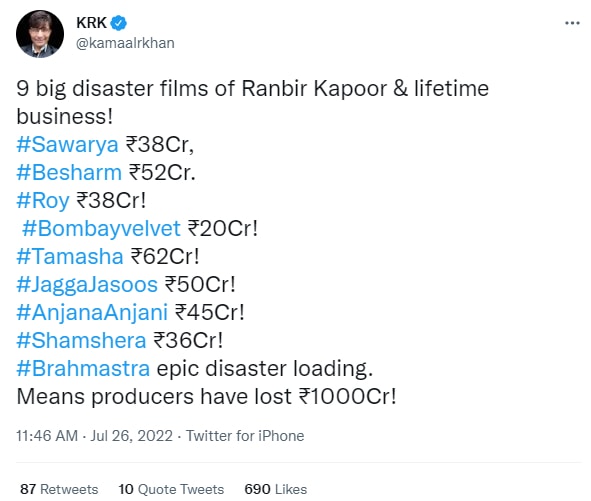 tell me, KRK He also keeps on reviewing Bollywood films and openly targeting the stars on Twitter. This tweet of KRK has come to the fore when Ranbir Kapoor’s film ‘Shamshera’ is proving to be a flop at the box office. In this tweet, KRK has also described Ranbir’s most awaited film ‘Brahmastra’ as a disaster even before its release.

Let me tell you, the audience is waiting for Ranbir Kapoor’s upcoming film ‘Brahmastra’ for a long time. For the first time in this film, he will be seen sharing the screen with Alia Bhatt. The first part of the film, which was announced almost 7 years ago, will finally hit the theaters on September 9. Apart from Ranbir Kapoor and Alia Bhatt, the film also stars Amitabh Bachchan, Nagarjuna Akkineni and Mouni Roy in pivotal roles.

Is Kareena Kapoor pregnant for the third time? Bebo broke the silence – ‘Saif has already contributed a lot to the population’