For a long time, an atmosphere was being created about Vijay Deverakonda and Ananya Pandey’s film Liger that it would live up to the expectations of the makers and this would also give some relief to Bollywood. However, this film also could not become a savior for the sinking Hindi cinema. The film may have done well with its initial box office collection due to advance booking, but only after noon the audience in its show was seen decreasing. Meanwhile, famous trade analyst Taran Adarsh ​​reviewed Liger in one line and termed it as OUTDATED.

A day after the film’s release, Taran Adarsh ​​tweeted about the Telugu star’s film, which may surprise the makers. He wrote, ‘Liger: OUTDATED i.e. old or say nothing new…’ He gave stars out of 5 in its rating and wrote, ‘#Liger did not live up to the expectations.. Complete waste of talent, resources and opportunities… #VijayDeverakonda deserves a better launch in #Hindi films… #Liger doesn’t roar! #LigerReview.’ It is also worth noting that the film has been released amidst the Bollywood boycott trend and its producer is also Karan Johar. This could also be a reason for his being beaten up badly!

On this post of Taran Adarsh, a user wrote, Had it been in the South, its action would have been exciting and the buildup of this film would also have been different. While one wrote, Karan Johar’s mission was successful… he successfully flopped the South Indian film. At the same time, many people are writing that there was not much need to boycott it. The support of Bollywood was expensive for the South. However, a section of the users is also writing that keep boycotting… not stopping…. All the people trolled Ananya Pandey. 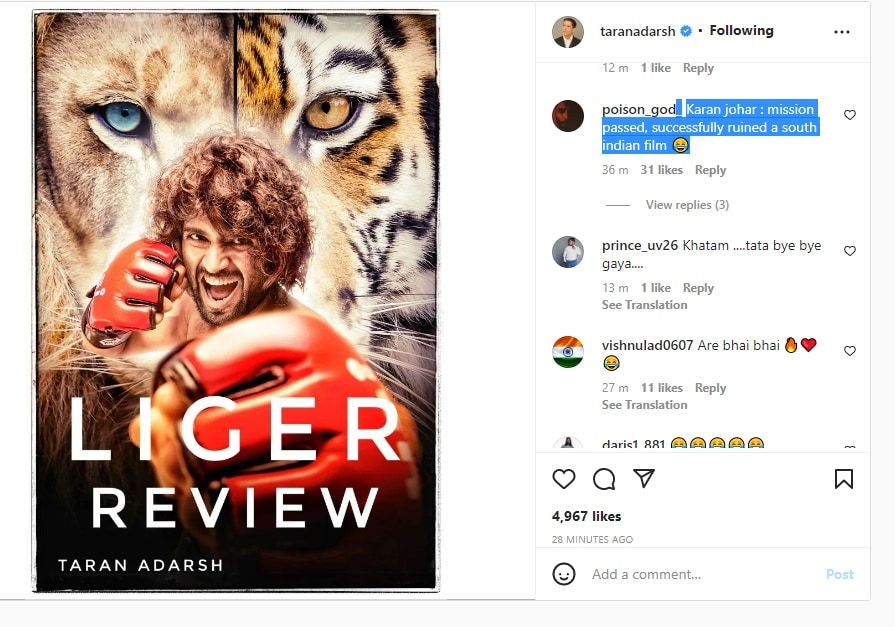 On the other hand, KRK i.e. Kamal R Khan has also made a tweet in which he called Liger a flop. He wrote, ‘#liger has flopped! Now all our attention should be focused on #Brahmastra! After that #Pathan and #Tiger will also have to work hard!’ On this tweet of his, some users have also started boycotting Vikram Vedha’s remake, Pathan and Brahmastra. One user wrote, “Karan Johar has distributed 500-500 rupees to the right wing for the promotion of Brahmastra, it is difficult to flop…

Friends #liger It’s Flopped! Now all our attention #brahmastra Must be focused! afterwards #pathan And #Tiger But you have to work hard!

Vijay Deverakonda was expecting a blockbuster even before its release

For information, let us tell you that Vijay Deverakonda had expected this film to be a blockbuster even before its release. He had said in a promotional event that ‘wherever I have gone, I have received immense love from people everywhere… the film is sure to be a blockbuster…’ but it seems that this overconfidence of his was overshadowed by ‘Liger’ as well. He has also suffered a setback for his Hindi debut!