Johnny Depp Conflict and defamation case involving ex-wife Amber Heard became more popular worldwide than ever before. Johnny is a great actor as well as a good singer. He has a keen interest in art. He is also an amazing artist. Johnny recently sold his first collection of patina, created by him and dedicated to Hollywood rock icons, in collaboration with the UK gallery series, Castle Fine Art. From this sale, Johnny collected more than 3 million pounds i.e. 28 crores in a few hours.

The art gallery has featured a painting of popular singer Bob Dylan being created by Johnny Depp on its Instagram account. Along with this, he has also shown a glimpse of all the paintings made by Johnny. These paintings depict Hollywood celebrities and Johnny named the collection ‘Friends and Heroes’. 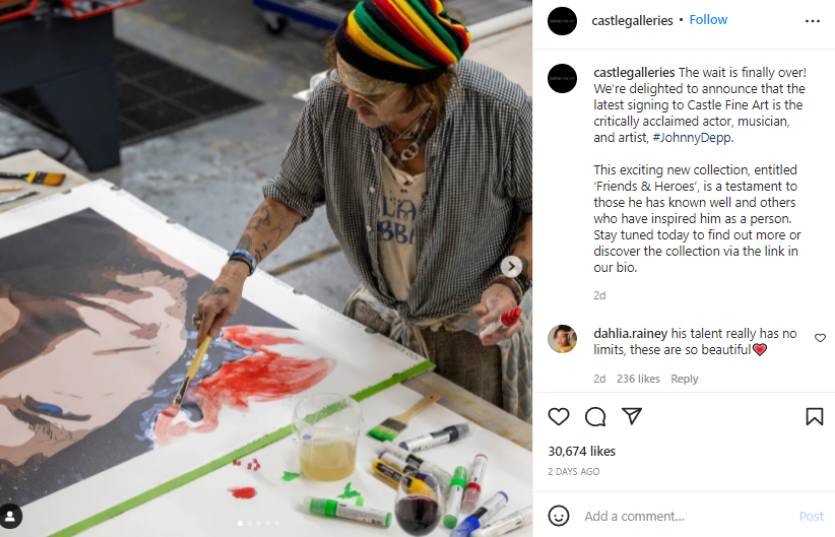 These paintings by Johnny Depp featured artists such as Bob Dylan, the late actress Elizabeth Taylor, Al Pacino and Keith Richards. Castle Gallery shared these pictures of Johnny, writing, “This exciting new collection, titled ‘Friends and Heroes’, is a testament to the people he knows well and others who have seen him as a person. Inspired as

Sharing a picture on his Instagram account, Johnny Depp announced on Thursday that the painting made by him is going to be sold. In the picture, he can be seen sitting in front of his four art frames. He wrote in his caption, “Now at Castle Fine Art.” That is, now you will be able to see and buy it in Castle Fine Art.

As soon as Johnny Depp posted the announcement of selling the painting. People started reaching the Castle Gallery website to buy it, which caused the site to crash. The art gallery tweeted and wrote, “Johnny Depp rocked the internet! The website will be backed up soon.