Ranbir Kapoor (Ranbir Kapoor) and Alia Bhatt starrer film ‘Brahmastra’ has been praised by Hrithik Roshan. The Vikram Vedha star had attended the screening of the film yesterday along with his two sons. The actor is so impressed with the action-adventure film that he wants to watch the film again. The actor took to Twitter on Saturday to praise the film.

Hrithik Roshan took to Twitter to reveal the things he liked about the film. Hrithik tweeted, ‘I need to watch ‘Brahmastra’ again! What to say about Action, Grading, BGM, VFX and Sound Design. Awesome work!! Enjoyed it to the fullest. Congratulations to the team!’ Karan Johar commented on Hrithik’s post
The actors were so excited to write about the film that they missed the name of the film in the tweet. Correcting his mistake, he later wrote – ‘Brahmastra.’ After the actor’s comment about the film, his fans showered love on the film in the comment section. The first to comment was the producer of the film, Karan Johar. Responding to Hrithik’s tweet, he shared several heart emojis and wrote – Dugu. 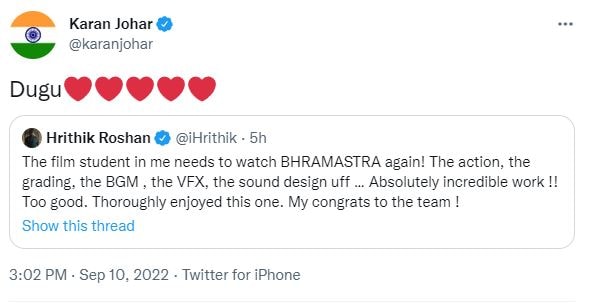 Hrithik to star opposite Saif Ali Khan in ‘Vikram Vedha’
Hrithik will be seen opposite Saif Ali Khan in his upcoming film Vikram Vedha. The film will release on 30 September. The trailer of the film was released earlier this week. It is a remake of Tamil film. In the original film, R Madhavan played the role of a policeman, while Vijay Sethupathi played the role of a gangster.

Hrithik to star opposite Deepika Padukone in ‘Fighter’
Radhika Apte will also be seen in the Hindi film. She is playing the role of Vikram’s wife and Vedha’s lawyer. Hrithik also has ‘Fighter’, in which Deepika Padukone has been cast opposite him. The action film is being directed by Siddharth Anand. ‘Fighter’ will be released in September 2023.