Fact Check: Alia Bhatt-Ranbir Kapoor helped Pakistani flood victims? Know the truth of this news that would have gone viral

Ranbir Kapoor (Ranbir Kapoor) and Alia Bhatt’s ‘Brahmastra’ is releasing on 9 September. Many people on social media are appealing to boycott films and stars. The reason for the fury of people is not only the old controversial videos of Ranbir Kapoor. Such claims are also being made on social media that the couple has donated crores of rupees for the flood victims in Pakistan.

As soon as the news spread on social media that Ranbir-Alia had provided financial help to the flood victims of Pakistan, people started trolling them. Because of this Alia Bhatt started trending on Twitter. Trolls are criticizing her with the hashtag ‘Alia My Foot’. Trolls are intensely boycotting the couple’s film. Alia and Ranbir did not make any donation
However, people’s displeasure about Alia is unnecessary, because the truth is something else. There is a news on social media, in which it is written that Bollywood has come forward to help the flood victims in Pakistan. ‘Brahmastra’ producer Karan Johar has donated 5 crores, Alia and Ranbir have donated 2 crores. 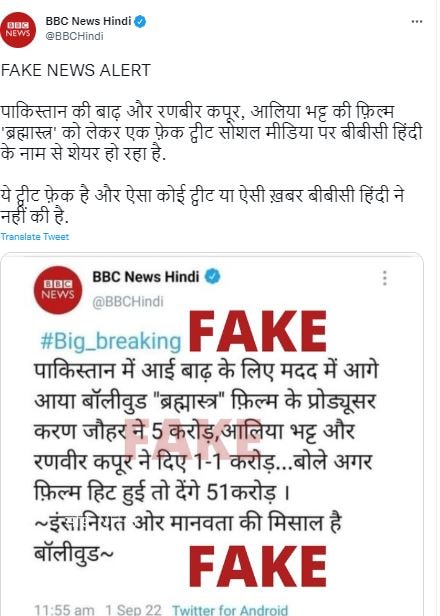 An attempt was made to instigate people against Alia and Ranbir
In false news, it was also told that the makers will donate Rs 51 crore if the film becomes a hit. In the last sentence, Bollywood has been described as a symbol of humanity and humanity. Due to this post, people are expressing their displeasure on Alia and Ranbir, because they are unable to bear that the couple is helping the enemy country.

False news is being spread on social media
One user wrote that money earned from India is being distributed in Pakistan. Boycott Bollywood. Another user wrote that when there is a flood in India, no one from Bollywood comes forward. However, it was later clarified that this news related to the couple is false. It would not be wrong to say that some mischievous elements are trying to defame Bollywood and film stars by spreading false news, so that people do not see them and their films.