The late Marvel Studios actor and ‘Black Panther’ fame Chadwick Boseman has won an Emmy Award two years after his death. He has received this award for his voice over performance. He was posthumously awarded the Creative Arts Emmy Award. He starred in the Marvel Studios web series ‘What If…?’ In this, voice was given to the main character ‘T’Challa’. Chadwick asked ‘What if…?’ His popular character was featured in the episode of Ke T’Challa Became a Star-Lord.

The character explores a timeline where Wakanda was kidnapped by Prince Ravers and grew up to become a space bandit named Star Lord instead of becoming a Black Panther. ‘What If’ is an animated series from Marvel Studios. Its first season premiered worldwide on Disney Plus between August and October 2021 and was a huge success. 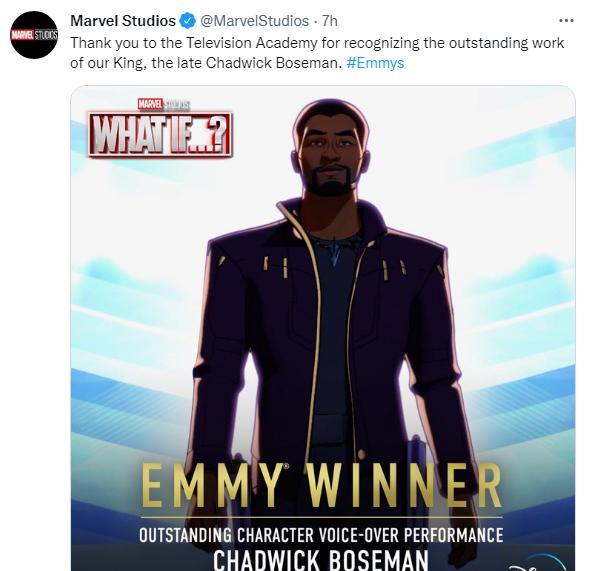 ‘What if…?’ in early 2023 Season 2 will come for which the fans are eagerly waiting. Marvel Entertainment reacts to Chadwick’s win. A tweet from the Marvel Studios official account read, “Thank you to the Television Academy for recognizing the outstanding work of our King, the late Chadwick Boseman. Hashtag emmy.”

Marvel Studios has shared an animated picture of Star Lord with this tweet. Chadwick defeated many of the best performers in this category, including ‘What If’ co-star Jeffrey Wright, Jessica Walter of ‘Archer’, F Murray Abrahams of ‘Moon Night’, Julie Andrews of ‘Bridgeton’, ‘Big Mouths’ of Maya Rudolph and Stanley Tucci of ‘Central Park’.