Dastaan-Go: Prithviraj Kapoor, the ‘Papa Ji-Badshah’ of the world of Hindi films

Story-Go: Is there any time to tell and listen to stories? Maybe it would have happened. Or would it not happen. But one thing definitely happens. Tales, stories are interesting to everyone. It would be better if they were present on time. If it is not, it is of the past, even then it is not bad. Because they always go not only by telling us something, but also by teaching. Brings back memories of our times. Even after sweetening the spices of the serious ones, they drink it softly. That’s why ‘Dastaan-Go’ has started, the process of bringing interesting stories to your loved ones. Will try to continue this process. Monday to Friday, everyday…

Sir, That was the year 1928, when the ‘Frontier Mail’ (now called ‘Punjab Mail’) from Peshawar stopped at Colaba station in Bombay. A 21-year-old youth got down on the platform from that train. Suitcase in hand and bus in pocket, took 75 rupees. As soon as he reached out of the station, he called the person ‘Victoria’ (Wagon) in a loud voice. When he came near, ordered him, ‘I want to see the sea’, ‘Yes sir’, said Victoria and he took her to the seashore. After reaching there, the young man stood looking at the sea for some time. Gaia, the depth of the ocean, imagining its strength. You are making a plan in your mind that the rule has to be established over ‘this ocean of Bombay’ (consider it filmy). And in a few passing years, he was successful in his plan. Do you know who this young man was? Prithviraj Kapoor. The ‘Papa Ji Badshah’ of the world of Hindi films.

In the world of Hindi films, if anyone has got the status of ‘first family’, then it is ‘Kapoor’s family’. Because it is probably the only family, whose today the fourth generation is also making an impact in films. Before this family, it was Prithviraj Kapoor. Prithviraj sahib, whom his acquaintances used to call ‘Papa ji’. Because he was the father of the first ‘show-man’ of Hindi films, Raj Kapoor. But sir, this Prithviraj Kapoor had achieved the status of ‘Badshah’ for those outside the film world. Rather why say ‘thee’, it has happened even today. If you are not sure, then just think about ‘Akbar Badshah’ and see for yourself. Meaning that how ‘Akbar Badshah’ must have looked. How would you keep going? What would have been his style of speaking, etc. Did you miss something?

Sir, it can be said with the claim that if there is any picture in the mind, then it will be of the Akbar Badshah of the movie ‘Mughal-e-Azam’, that is, Prithviraj Kapoor. Because out of all the generations of people present in India today, no one would have seen ‘Akbar Badshah’. But it is quite possible that you must have seen the film ‘Mughal-e-Azam’ of ‘Kamal Asif’ (K. Asif should say the same). And if you have seen it, then it should also be assumed that Prithviraj Kapoor, the ‘Akbar Badshah’ of that film, would not have allowed someone else’s picture to stick in the mind of the watcher, in this capacity. However, when these ‘Akbar Badshah’ started his journey in films, he did it in the status of a fakir. Not the ‘character fakir’ of films, but the fakir of real life. Although he had found the family status effective even then. Lyallpur used to be a town in the Punjab of India during the British era. Nowadays it is in Faisalabad, Pakistan. There is a place named Marine, where Prithviraj Sahib was born. The date was November 3 i.e. today and of the year 1906. His father Basheswarnath used to be an officer in the ‘Imperial Police’ of the British and grandfather Keshavmal Tehsildar. People of this type of status were considered to be of great status at that time. And it was expected that the children of such families would also carry forward the relationship of the father and grandfather. Socialists will get a big position in the government, a big position. But Prithviraj sahib started a new story. Since childhood, he was deeply attached to the world of acting and films. When the parents saw, they got married at the age of just 17 years. A year later, the eldest son also became his.

But all these things could not stop the steps of Prithviraj Sahab from moving towards films. He had finally reached Bombay to try his luck in films. However, leaving his family status, a new beginning here in the ‘city of Maya’ was not easy for him. Had to start off as a crowd extra artist. That used to be the era of Aboli films. But the performance of Prithviraj sahib spoke even from amongst that crowd of extras. Took the attention of the people towards her. And in the third film, he appeared on the film screen instead of ‘extra artist’, as the lead actor. This film, ‘Cinema Girl’, came in the year 1929. That is, within just a year, Prithviraj sahib had stepped up his steps to rule the film sea of ​​Bombay.

Then after this a big opportunity came, when the first talkie film was made. ‘Alam-Ara’, in which Prithviraj Sahab appeared in a supporting-starring, but effective role. Filmmaker Ardeshir Irani gave him the role of ‘Senapati Adil’ in this film, who falls in love with Sultan’s second wife ‘Dilbahar’. But he got the most fame of his career so far when he appeared in the character of Sikandar in famous filmmaker Sohrab Modi’s film ‘Sikander’ (1941). It is said that for this, Modi-sahib was looking for such an actor, who could himself compete with him in terms of weight of voice and dialogue-delivery. For this film, he had decided himself for the role of Raja Porus (Paurush). So, ‘Alexander’ he wanted his equal. And this ‘equality’ he got from Prithviraj Sahib. 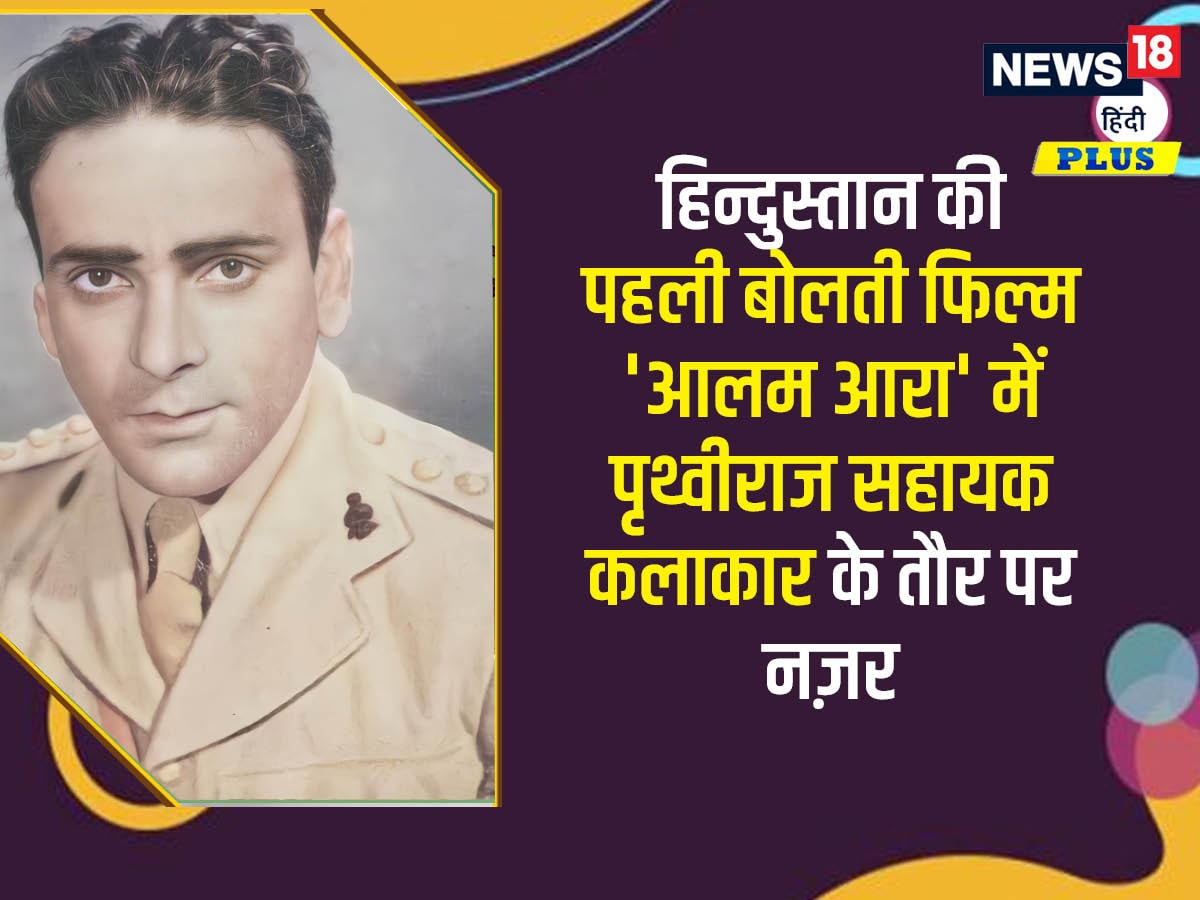 In this way, Prithviraj sahib was now playing triple roles simultaneously. On one hand, he was a top actor of films. On the other hand, he is the owner of ‘Prithvi Theater’ and in the third character he is also the patron of all the people associated with him. An example has already been given of how effectively he molded himself in these three characters, Prithvi Theater Wali. Now look at two more examples. The talk is about the time of shooting of the film ‘Sikandar’. It is said that then the ‘big status’ Sohrab Modi often used to scold the actors who came late on the shooting badly in front of everyone. Those who did not treat him with respect, he used to reprimand him too. Writer Madhu Jain writes in her book ‘The Kapoors’, ‘Once like this, Prithviraj Sahab, disguised as Sikandar, was sitting on the set when Sohrab Modi came. Seeing him, Prithviraj Sahib did not stand up, nor did he pray or salute.

‘That’s all, Sohrab Modi got uprooted on this matter. Almost trembling in a loud voice, Prithviraj asked the reason for this rudeness. So Prithviraj Sahib replied in a relaxed manner – You are talking to ‘Alexander: The Great’ at this time. And Sikandar does not know Sohrab Modi… Just had to hear that Sohrab Modi’s attitude changed. While saluting him, he said – but I know my Alexander very well. It is said that Sohrab Modi did not scold anyone after this. A similar incident happened in the shooting of the film ‘Mughal-e-Azam’. According to Deepa Gehlot, co-author of the book ‘Prithviwalas’, ‘Prithviraj Sahab’s acting ground was prepared from theatre. That’s why he used to have a lot of emphasis on real acting. For this reason, in ‘Mughal-e-Azam’, when Emperor Akbar went to Ajmer to seek his son’s vow, Prithviraj Sahab actually walked barefoot on hot sand.

That is, by the passing of days, months, years, Prithviraj sahib had truly attained the status of ‘Papa Ji Badshah’ of the film world. As soon as he stepped on the land of Bombay, while looking at the sea for the first time, he had fulfilled the plan of the kingship that was tied on it. Such, the kingship which his brother-in-law Raj Kapoor sahib made more impressive. And the generations that came before him did more than that, whose stories are not covered in a single ‘Dastaan’ even in a complete book. But somewhere the limit has to be drawn. That’s why…

That’s all for today. God Hafiz.