Boycott culture did not affect ‘Brahmastra’? Advance booking of the film happening indiscriminately

film experts If we believe, Ranbir Kapoor and Alia Bhatt’s film ‘Brahmastra’ can end the ongoing drought at the domestic box office. Directed by Ayan Mukerji, the film will release on September 9. Advance booking of the film is looking good. If this trend continues ahead, then the film will get a good start at the box office. 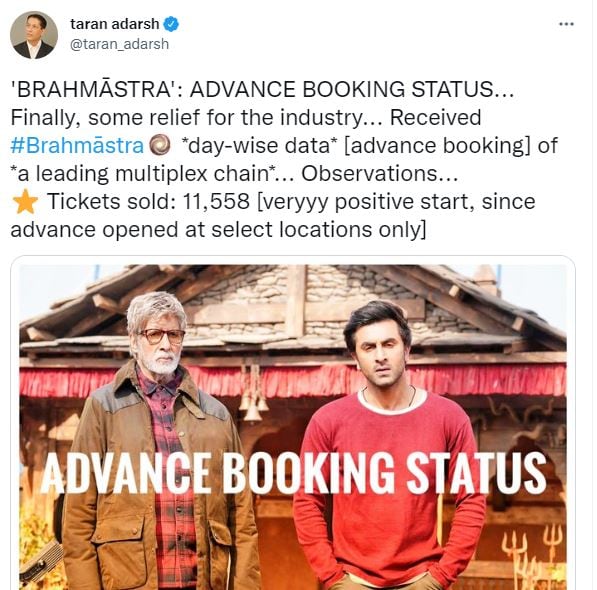 He also said that ‘Brahmastra’ will contribute around 63 per cent of the total ticket sales on Friday’s business, followed by 25 per cent on Saturday and 12 per cent on Sunday. Apart from this, mass circuit, spot booking will also play an important role on the first day. Meanwhile, the first weekend will depend on the response of the audience. Earlier, some users were appealing for the film’s boycott using the hashtag on Twitter, which does not seem to have any effect on the people.

Shahrukh Khan has a cameo in ‘Brahmastra’
Apart from Ranbir and Alia, ‘Brahmastra’ stars Amitabh Bachchan, Nagarjuna Akkineni and Mouni Roy in the lead roles. Shahrukh Khan will also be seen in a cameo in this. Ahead of the release, the makers have released a new trailer, which features Amitabh as Guruji, warning Ranbir against destruction. If the three parts of ‘Brahmastra’ ever come together, then there will be destruction.

Ranbir Kapoor seen protecting the last piece of ‘Brahmastra’
It is shown in the trailer that while Shiva tries his best to protect the last piece of ‘Brahmastra’ with his fire weapon, he also has to save his girlfriend Isha (Alia Bhatt) from the villain. They unite with Vanarastra (Shahrukh) and others to bring peace on earth. The film took five years to complete and is the first part of the upcoming film trilogy.