Bobby Deol Has shared two pictures with his mother Prakash Kaur on social media. The love between mother and son is visible in both these pictures. In one picture, seeing Bobby, it seems that how relaxed he is feeling with his mother. Many pictures of Dharmendra’s second wife and Bollywood actress Hema Malini keep coming out, but Prakash Kaur appeared after a long time. Seeing this picture, the fans are praising the cute bonding of mother-son.

Seeing the picture that Bobby Deol has shared with his mother Prakash Kaur on Instagram, it seems that some shooting set has been clicked. Bobby is seen wearing a white Pathani dress with a pink colored turban, while Prakash Kaur is seen talking lovingly looking at her son wearing a gray salwar suit. In one picture, Bobby seems so relaxed with his mother that he has closed his eyes.

Bobby Deol said love you mother
In this unseen picture of Bobby Deol and Prakash Kaur, the fans are lavishing love after seeing the cute bonding of mother-son. By sharing this picture, Bobby has shared the heart emoji by simply writing ‘Love you mother’ in the caption. 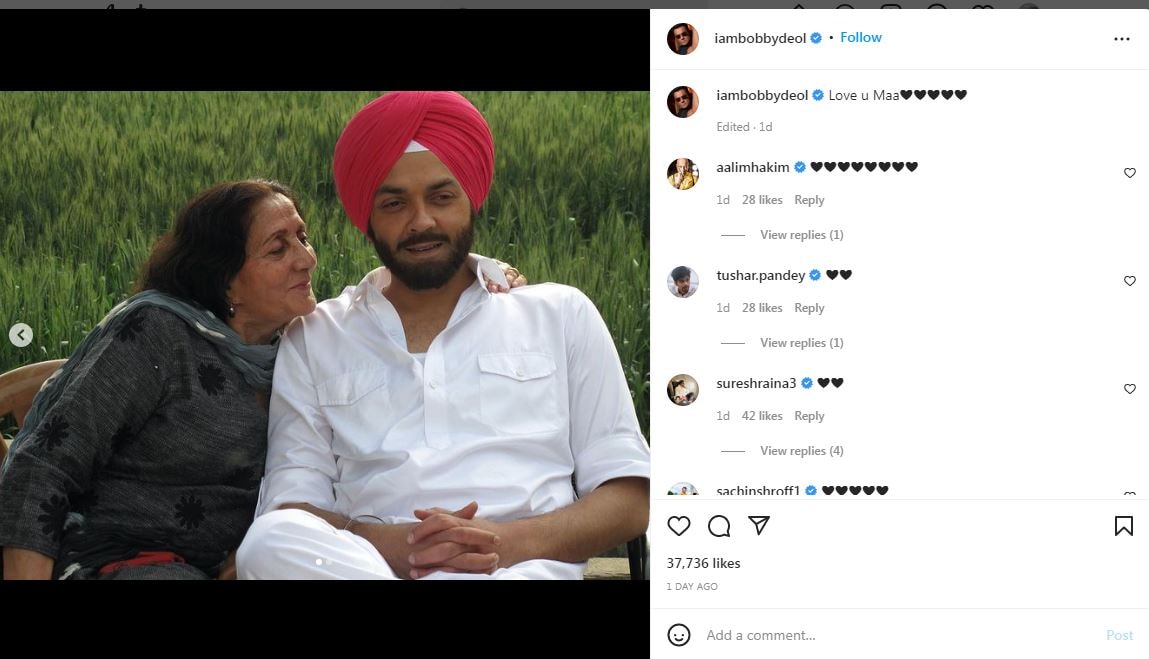 Dharmendra’s first wife is Prakash Kaur
Let us tell you that Prakash Kaur is the first wife of Bollywood veteran actor Dharmendra and his sons are Sunny Deol and Bobby Deol. At the same time, after coming to the film world, Dharmendra married for the second time to actress and politician Hema Malini. Hema and Dharmendra have two daughters Esha Deol and Ahana Deol. Photos of light rarely come out.

Also read – Bobby Deol is now desperate to do a romantic film, said – ‘Waiting for the right script’

Bobby Deol is in discussion because of ‘Ashram’
Bobby Deol has done many films like this but has been in the news for some time due to his series ‘Ashram’. People liked the actor a lot in this series. There have been three seasons of this series.