As soon as Raju Srivastava came to his senses, his daughter Antara Srivastava made a special appeal to the people.

Raju Srivastava Health Updates: Famous comedian Raju Srivastava is admitted in AIIMS, Delhi for the last 15 days. On August 10, he suffered a heart attack during a workout in the gym, after which he was admitted to AIIMS. Ever since he had suffered a heart attack, he had not regained consciousness and due to this the team of doctors involved in his treatment, as well as his family and his fans were very worried, but the prayers of crores of people finally came in handy. And today after 15 days he came to his senses.

Since Raju Srivastava came to his senses, there has been a wave of happiness among his fans. Let me tell you, the doctors said that if Raju does not come to his senses, then how will he be able to do further treatment. During this, a time had come, when the doctors were also giving up and Raju’s family members were slowly reaching AIIMS, but his wife Shikha Srivastava had full hope that her husband would recover and win this battle. Many hopes have been raised since Raju will finally return home safely. 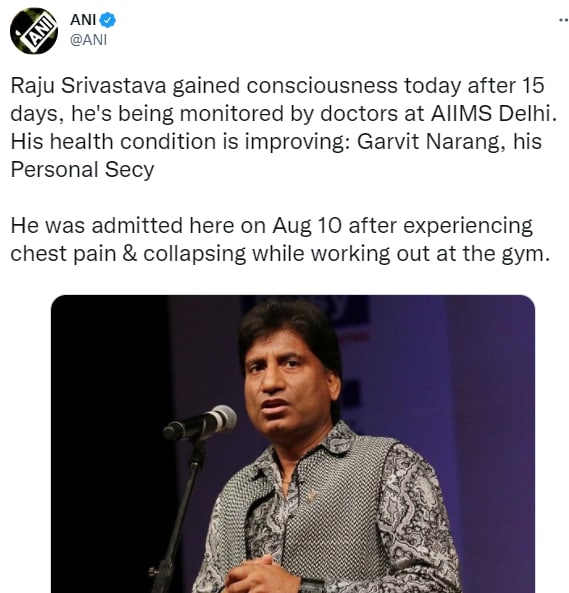 There itself, Raju Srivastava As soon as he came to his senses, his daughter Antara Srivastava has made a special appeal to the people. Antara said, ‘Raju Srivastava ji’s condition is stable and he is slowly recovering. He is currently on ventilator. Only the statements of AIIMS Delhi and Raju ji’s official social media accounts are reliable and genuine. Any other news or statement from anyone else is unreliable.

Antara Srivastava further said, ‘The doctors and their entire team in AIIMS Delhi are working hard and diligently. We are grateful to him and all his well wishers. Request all of you to continue your love and prayers for him. Meanwhile, Sunil Pal, one of Raju’s very close friends, is also very happy to come to his senses and has expressed his gratitude to all those people who were praying for Raju. Sunil Pal has called it a miracle.

Manushi Chhillar-Akshay Kumar pair will be seen in this film after ‘Samrat Prithviraj’! this is the shooting schedule

Manushi Chhillar-Akshay Kumar pair will be seen in this film after ‘Samrat Prithviraj’! this is the shooting schedule