Arjun Kapoor leaves for Dubai for the shooting of his film, very happy to find something special in the flight

Bollywood actor Arjun Kapoor (Arjun Kapoor) has been busy with his new project. He himself has given this information to the fans through his Instagram story. According to Arjun’s latest post, he has left for Dubai to shoot for his upcoming film.

Giving information about the shooting of the film, Arjun posted on Instagram and wrote, ‘En route film number #19’. Along with this, he shared a picture of Dubai’s passport and ticket. Earlier on Sunday evening, Arjun was spotted at the Mumbai airport.

busy with new project
Along with telling about his new project, Arjun remembered his film ‘Sandeep Aur Pinky Faraar’. Let us inform that this film was released last year, in which actress Parineeti Chopra was seen in the lead role along with Arjun. Tagging Parineeti in his second new post, Arjun wrote, “Look who I met on the flight @parineetichopra.” However, Parineeti is yet to reply to Arjun. 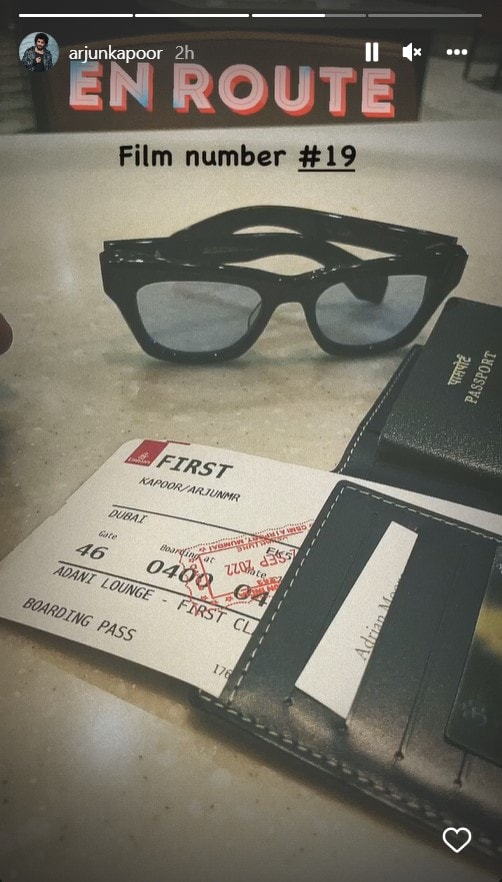 Let us tell you that ‘Sandeep Aur Pinky Faraar’ is produced by Yash Raj Films. It was directed by Dibakar Banerjee. Earlier, the two had worked together in ‘Namaste England’ and ‘Ishaqzaade’.

Will be seen in ‘The Lady Killer’
Arjun was recently seen in Mohit Suri’s Ek Villain Returns alongside John Abraham, Tara Sutaria and Disha Patani. In the coming days, Arjun Kapoor will be seen in ‘The Lady Killer’ with Bhumi Pednekar. Apart from this, he will also be seen acting in Aakash Bhardwaj’s ‘Kutti’ with Tabu, Konkona Sen Sharma, Radhika Madan, Naseeruddin Shah and Kumud Mishra.

Live in discussion about affair
Arjun is often in news about his profession as well as his love with Malaika Arora. This couple often stays in lime light to spend time with each other. Fans are very happy to see them together. Fans are waiting for their marriage for a long time.