Siddharth Malhotra (Sidharth Malhotra) and Tara Sutaria, the remake song ‘Masakali 2.0’ was released on Wednesday. Fans of the original song wondered how AR Rahman would react to the new version. Let us tell you that AR Rahman is not happy with this.

AR Rahman refrained from commenting on the remix version of ‘Masakali’ but took to Twitter to talk about the original song. He shared a note, the caption of which read, ‘Enjoy the original ‘Masakali’. 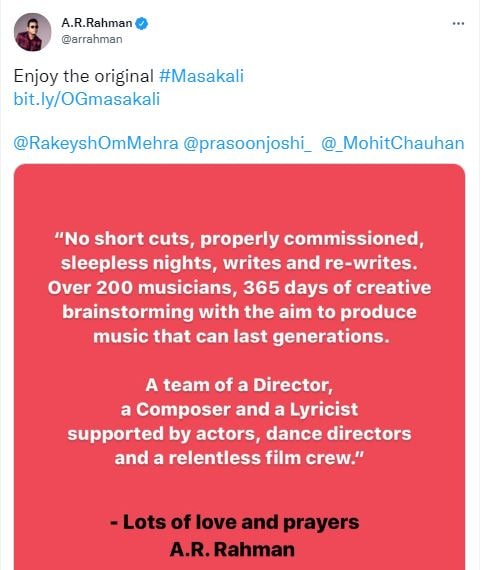 It took a lot of hard work to make ‘Masakali’
The note reads, ‘No short cut. It took sleepless nights to make this. It was written over and over again. More than 200 musicians, after 365 days of thought and thought, created music that can be heard for many generations. A team of directors, composers and lyricists, supported by actors, dance directors and film crew – lots of love and blessings to A.R. Rahman.’

Netizens criticize ‘Masakali 2.0’
AR Rahman’s fans also came out in his support and shared their anger on Twitter. One fan wrote, ‘Now we know what it takes to make the world’s most non-violent man angry.’ Another user wrote, ‘I am with you AR Rahman sir. I will support only original songs as opposed to rubbish remixes and remakes.

Original song ‘Masakali’ from ‘Delhi 6’
A third user wrote, ‘Classic: A magic that can’t be recreated. This is what AR Rahman is trying to tell you. The original song is from the 2009 film ‘Delhi 6’, starring Abhishek Bachchan and Sonam Kapoor. It was composed by AR Rahman, written by Prasoon Joshi and sung by Mohit Chauhan. The recreated version of this song is sung by Tulsi Kumar and Sachet Tandon and music is given by Tanishk Bagchi. A large section of music lovers criticized it and reacted by creating memes on Twitter.