Alia Bhatt’s ‘Darlings’ produced by Shah Rukh Khan’s Red Chillies Entertainment is in the news these days. There are many valid reasons behind this. The first is that this upcoming film has been made under the banner of Alia’s production company ‘Eternal Sunshine Productions’ and through this Alia stepped into the world of production. The second thing is that this is Alia’s first film in which she is going to work off camera with Shahrukh Khan. In such a situation, both these stars are quite excited for this new initiative. Amidst all this, Alia thanked Shahrukh for his cooperation and called him her most favorite actor. Along with this, Alia also said that she will get manicure and pedicure done with her after the release of ‘Darlings’.

The trailer of the film ‘Darlings’ was released on July 25. The film’s trailer was well received by the film critics including the fans. Alia has done a lot of acting in the superb trailer of this upcoming dark comedy. Apart from Alia, the audience was also happy to see the acting of Shefali Shah, Vijay Varma and Roshan Mathew. 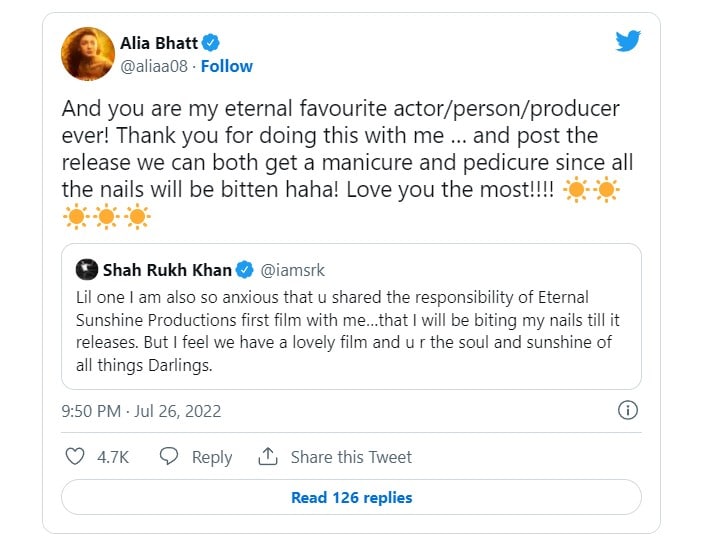 Alia told favorite
Now Alia again commented on this post of King Khan and while thanking him, told him about his heart. Alia Bhatt, retweeting Shahrukh’s tweet, wrote, “And you are my internal most favorite actor. The person.. is the creator! Thank you for doing this with me… and post release, we can get both manicures and pedicures because all the nails will be cut, haha! I love you the most..”

ready to premiere on netflix
Let us tell you that ‘Darlings’ has been directed by Jasmeet K Reen. It is set to premiere on Netflix on 5 August 2022. Now after Alia-Shahrukh Khan’s funny tweet, it can be said that next Friday Darlings is going to be a fun watch.

Paka-River of Blood Review: Anurag Kashyap can make anything happen