Mumbai: Akshay Kumar’s first look in the Marathi film ‘Vedat Marathe Daudle Saat’ is being liked not only by the fans but also by Bollywood actor Ajay Devgn. Akshay Kumar is playing the role of Chhatrapati Shivaji Maharaj in the film being directed by Mahesh Manjrekar. This look of Akshay, who is trying his hand in a Marathi film for the first time, is going viral on social media. At the same time, Ajay also spoke his heart about the film, while Akshay Kumar did not take any time to thank him.

Actually, Ajay Devgan shared a picture of Akshay Kumar on Twitter looking at Chhatrapati Shivaji Maharaj’s getup and wrote, ‘Dear Akshay Kumar, I am very excited to see you in the role of Maharaja Chhatrapati Shivaji Maharaj in the Marathi film ‘Vedat Marathe Daudle Saat’. He is my favorite Maratha hero and I am happy that another film is being made saluting this great warrior. 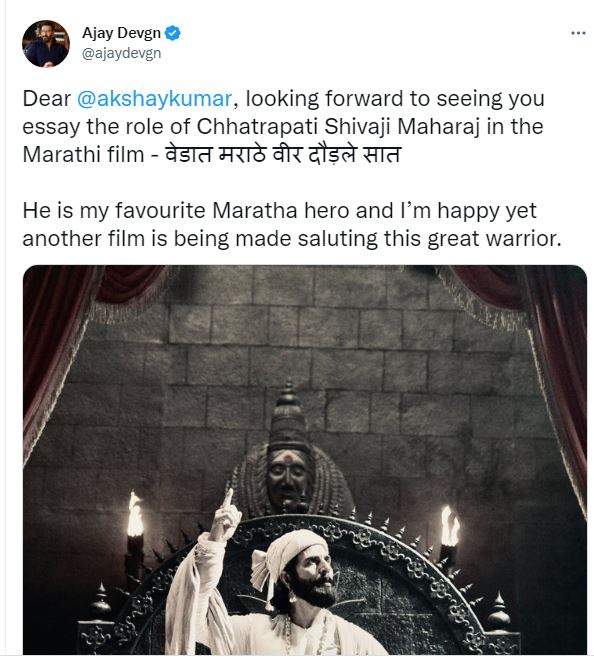 Akshay Kumar’s happiness knew no bounds due to this post and praise of Ajay Devgan. Immediately retweeting Ajay’s tweet, expressing his gratitude, wrote – Thank you brother. Akshay Kumar started shooting
Akshay Kumar has played the role of historical heroes in the past as well. Prithviraj was seen in the role of Chauhan in the Bollywood film ‘Samrat Prithviraj’ released this year. Let us tell you that while giving information about the shooting of this Marathi film on Instagram, Akshay Kumar has written, ‘Today I am starting the shooting of Marathi film Vedat Marathe Veer Daudle Sat. I am fortunate that I am able to play the role of Chhatrapati Shivaji Maharaj ji. I will try my best by taking inspiration from his life and taking blessings of Mata Jijau. Keep your blessings on us ‘. This film will be released on Diwali next year.

Ajay Devgan is also celebrating the success of his film ‘Drishyam 2’ these days. Ajay’s film is very much liked by the audience, so it is earning a lot at the box office.