Shahid Kapoor (Shahid Kapoor) wife Mira Rajput Kapoor is very active on social media. He is very fond of food and drink. After marriage, she misses the spicy and spicy food of Delhi a lot. She has mentioned it many times during her posts and interviews. A glimpse of his food and drink is also seen in his post. A few hours ago, he shared a picture of himself. In this, she is seen eating pav bhaji. Along with this, he has also shown his love for cheese.

In the picture shared by Mira Rajput Kapoor, she can be seen in an off-white baggy top and short. She is enjoying pav bhaji while watching the sunset at the seaside. He is keeping a plate and bowl of Pav Bhaji in his lap. Sharing this picture, he wrote, “Pav bhaji, sunset and cheese. Hashtag why not. Like anything else… on everything?” 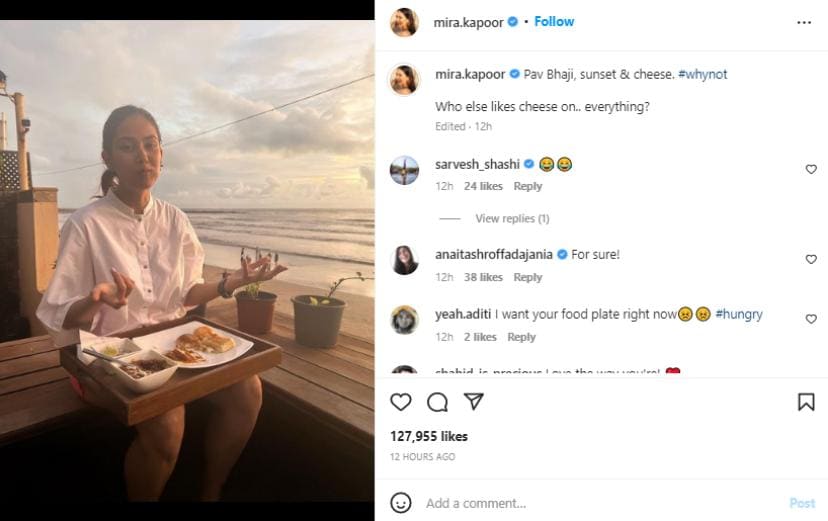 On this post of Mira Rajput, her friends and fans associated with the industry are commenting and answering Meera’s question. Anita Shroff Adajania wrote ‘Four Sure’ in the comment. Fashion stylist Tanya Ghavri wrote ‘me too’. One of his fans wrote, “I want your plate.” Another fan wrote, “I always like pav bhaji.”

Koffee with Karan 7: Shahid Kapoor talks about age gap with wife, what is the specialty of Mira Rajput Earlier, Mira Rajput’s husband i.e. actor Shahid Kapoor also shared a glimpse of the weekend special breakfast with his fans. He posed for the photo giving a goofy expression in a black and white picture. This picture was clicked by Ishaan Khattar. Sharing the picture, Shahid wrote good morning. To this Ishaan reacted and wrote, “Good morning, I have taken the best photo.”